I was a rushed person, a rushed child, no time for me, no place for me, no time to feel. No time for time. A slow song or a slow groove was like a friend who would wait for me; a guardian three steps ahead of me who would turn around and reach out their arm to me and wait for me to catch up… I’m here for you. A friend who had the time. --Bad Kitty 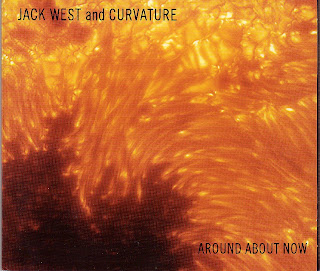 Now here's a totally unique little band from the the Bay Area. The blend jazz, blues, folk, Afro-pop with a little funk thrown in for good measure. If you dig some of Frisell's more recent work or acoustic Bela Fleck, but with a sunny groove with a few odd quirks in the mix, this could be up your alley. Give it a chance. It really grew on me and live these guys are really outstanding. The leader Jack West plays a custom 8 string acoustic guitar. What's remarkable is that at times he's playing bass parts, slide guitar and fingerpicking all at the same time. The band also employs the marimba lumina, a 14 string pedal steel guitar, drums and some percussion. This should be heard for its distinctly original concept.

Curvature's new release, Around About Now, is a dynamic collection of smokin' tunes - definitely Curvature at their most gregarious. Produced by Jack West with generous assistance from Lee Townsend, Curvature's fifth CD showcases seven of West's new compositions presented by the ensemble on unusual and wonderful instrumentation. Around About Now integrates West's unique take on acoustic jazz and blues with elements of country, electronic music, hip/hop and gospel brought in by the ensemble. Featuring Jack West on 8-string acoustic guitar, Joel Davel on electronic marimba, David Phillips on 14-string pedal steel, and drummer Darian Gray. These world-class musicians have developed masterful improvisational techniques and tight ensemble timing.

Although West is hesitant to categorize his music, he defines it as "modern American music by a musician from Georgia that's living in the diverse cultural landscape of California." Residing in the San Francisco Bay Area has allowed Jack to experiment with unusual combinations of instruments that give shape to his compositions and have helped him develop his style. It has also given him a chance to work with a slew of top Bay Area artists: Mike Marshall, Calder Spanier (formerly with Charlie Hunter Quartet), Scott Amendola, Jon Evans, George Brooks (Zakir Hussain's Rhythm Experience), Jenny Scheinman, Mark Summer (Turtle Island String Quartet), and many others.

Make no mistake, Jack West is on the path less taken. It's not only that he plays the eight-string acoustic guitar, a unique instrument that he had specially constructed while searching for the sounds he had been hearing in his mind. West is a musician dedicated to exploring uncharted territory, mapping stunning, minutely detailed soundscapes that feel uncannily familiar and yet completely fresh. This is heady music and there is a rigorous sense of structure to many of West's tunes. But in the fine-grained textures he creates with his quartet, there's also an intuitive sense of interplay and generosity of spirit found in the finest jazz ensembles.

"My main goal as a writer has always been to try and create music that sounds like something I haven't heard," says the Oakland-based guitarist. "For me, song writing is usually a process of following. I never sit down to intentionally write a tune-I just start to play, then as new ideas happen, I try to follow the ones that surprise me...the ones that don't sound like anything I've ever heard before."

A mostly self-taught musician, West, 35, grew up in Savannah, Georgia and moved to California for college. After 7 years of playing mostly original rock, blues, and Afropop, he decided to work in an acoustic vein. Even before he hired Santa Cruz guitar-maker Jeff Traugott to build his eight-string instrument, West had developed a highly personal sound using unusual tunings and a dazzling combination of bluesy slide work, finger-picking, and unorthodox percussive techniques. The extra strings, a low A and a high A, have enabled West to further expand his bag of tricks, for instance slapping a percussive line on the extra bass string while simultaneously playing slide or creating screaming-high octave slide runs with his first and third strings.

West's innovative yet accessible compositions combined with Curvature's dynamic concert performances are rapidly creating a buzz on both coasts. Though he may be an artist with big ideas, there's nothing academic about Curvature's sound. West's music is as emotionally vibrant and pulsing with life as any being created today. And his rapidly growing fan base in the jazz, acoustic, and jam communities is a testament to the timeless appeal of the curved musical reflections of this honest and talented rising star.
---------------------

wassup with these links? they don't work...I was looking forwarde to hearing this band.